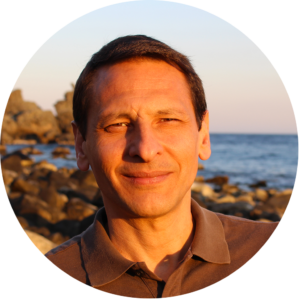 Yuji Cristaldi started practicing yoga in 1994, and for years he attended training courses for yoga teachers and taught yoga in Italy and Germany until he discovered the Iyengar® Yoga method in India. He was trained in Florence by Gabriella Giubilaro, and studied with David Meloni, Paola Porta Casucci and Emilia Pagani. He obtained the Intermediate Junior III diploma in 2013, until now the highest teaching certificate ever issued in Italy, and is a teacher trainer. For pleasure, he teaches anatomy at teacher training courses. He constantly follows refresher courses in Italy and India, at the Ramamani Iyengar Memorial Yoga Institute (RIMYI). He was vice president of LOY Light On Yoga Italy from 2010 until 2014.