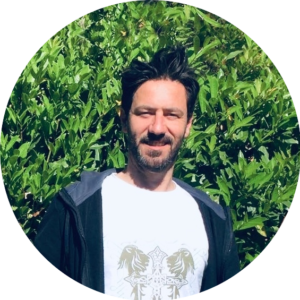 He began his training in holistic medicine in 2004 becoming Naturopath. On the same year he began his practice of yoga during his first trip to India stopping for periods in some Ashrams especially in Rishikesh and practicing with Indian masters. After moving to Lisbon, he followed Rodrigo Pereira Dos Santos (Iyengar Yoga) and Joaquina Delgado (Yoga Classico e Kundalini). In 2013, he obtains the diploma of RYT200 instructor in Hatha and Vinyasa Yoga with the master Chaitanya Nitai of Yoga Inbound School International. In 2016, he went again to India in the city of Vrindavana for another 100 hours of Ashtanga Yoga Training. It is registered as ERYT250 of Yoga Alliance® and in Italy with C.S.E.N. Daniele has been dedicated to personal practice for 15 years and has 6 years of teaching in Yoga. Among the other qualifications, he is also craniosacral operator (School of Bologna) and reiki master. He has also studied shiatsu massage (in Lisbon) and attended courses in vipassana meditation. He currently runs the Yoga Inbound School in Bologna.