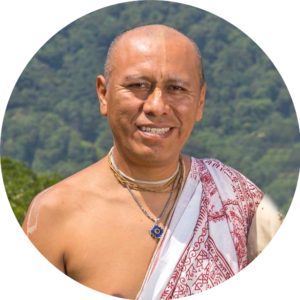 Chaitanya began to frequent the yoga environment at an early age, spending many years living in ashrams and monasteries in India, the United States and South America. Since 1991 he has been practicing and teaching Asthanga Vinyasa, Hatha Vinyasa, Bhakti Yoga. His teachers in the Vedic sciences are Swami Atulananda and Guru Maharaj. Since 2005 Chaitanya has been registered as an Expert Teacher of Yoga Alliance U.S.A. (E-RYT 500), training with the renowned international teachers: Pattabhi Jois (Ashtanga Yoga), Larry Schultz (Rocket Yoga), Reed Taylor (Power Yoga) and John Friend (Anusara). He is currently the director of the Yoga Teacher Training program in Italy and in his schools in the USA, INDIA and South America. As director of the Inbound School of Yoga, Chaitanya has trained more than 800 yoga instructors worldwide. In Peru Chaitanya runs an Eco Village, where she welcomes yoga students from all over the world. During her classes, Chaitanya expresses the spirit of Yoga through the practice of Asanas, Pranayama, Meditation and with the singing of Mantras and Kirtan.